Fighting Back Against White Nationalist Violence

When our neighbors are persecuted or attacked, that impacts all of us. I will make combating white nationalist violence a priority. Join me in standing up to hate.

In June 2015, a gunman shot and killed 9 Black worshippers at Mother Emanuel AME Church in Charleston after spending weeks compiling a racist manifesto.

In August 2017, a white supremacist rally in Charlottesville turned deadly when one of the white supremacists attending the rally plowed his car into a crowd of counter-protesters. The groups involved chanted racist and anti-Semitic phrases and praised the KKK.

In October 2018, a shooter killed 11 worshippers at the Tree of Life synagogue in Pittsburgh, the deadliest attack against Jews in American history. The alleged killer shared anti-Semitic threats and conspiracy theories online.

In August 2019, a gunman opened fire at an El Paso Walmart, killing 22 people - one of the largest domestic terrorist attacks against the Latinx community in modern history. The alleged gunman said he wanted to target immigrants.

These crimes took place at different times, in different places across our country, but they share much in common. They were intended to create fear. They were motivated by hate and bias. And they are incompatible with our values and have no place in American life.

Unfortunately, these are not isolated examples. The FBI logged over 7,000 hate crimes last year, and the government’s own surveys suggest there are hundreds of thousands more that go unreported or uncategorized.

These crimes could - and should - have been prevented. 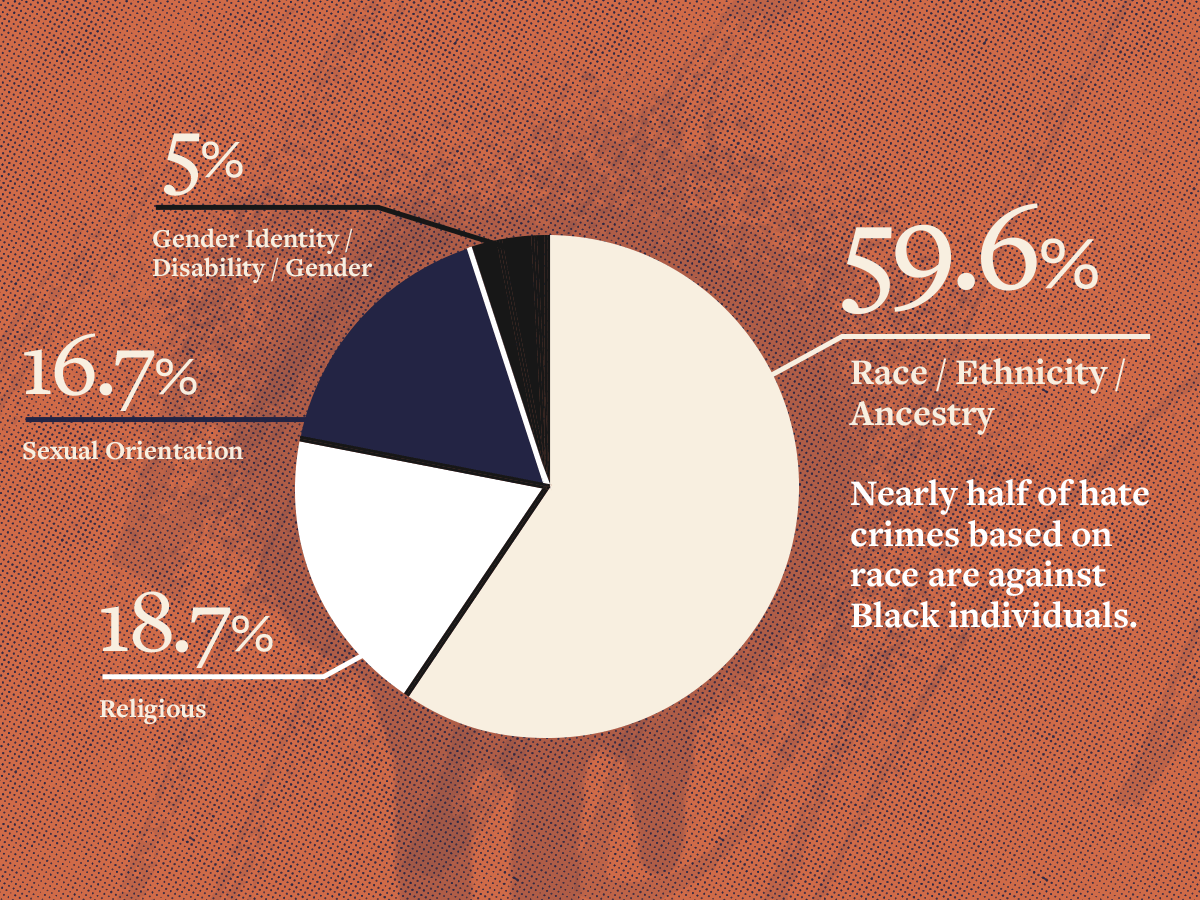 Disclaimer: These are based on reports to the FBI of victims of single-bias incidents, and there is often significant underreporting of hate crimes overall. Source: Department of Justice View in full screen.

Unfortunately, the current administration has chosen to ignore the threat posed by white nationalists and affiliated violent extremists. Donald Trump has openly stoked these fires. He has cozied up to white nationalists - even hiring some, like Stephen Miller, into his White House. Trump has made one racist remark after another. He has put in place racist policies, from the Muslim Ban to his ongoing effort to build a monument to hate on our southern border.

We have all experienced the consequences of our president’s moral deficiencies. Hate crimes spiked after Trump’s election, and last year violent personal attacks reached a 16-year high. And while many of these crimes have racial motivations, the white nationalist ideology also targets people of different beliefs, sexual orientations, and ability - anyone who doesn’t meet their warped definition of belonging. Anti-Semitic incidents, such as physical assault, vandalism, and attacks on Jewish institutions, surged nearly 60 percent in 2017, the largest single-year increase on record. Last year, nearly one in five hate crimes was motivated by anti-LGBTQ+ bias. Crimes against people with disabilities have increased. It is clear that racists, white supremacists, and people with hateful ideologies of all kinds feel empowered and protected by this president.

Domestic right-wing terrorism is completely incompatible with American values. It is a threat to American safety and security. In a Warren administration, we will use every tool we have to defeat it. Here’s my plan to address white nationalist violence and associated acts of terror.

Prioritizing the Prosecution and Investigation of White Nationalist Violence

Since the attacks of 9/11, the FBI and the Department of Justice have prioritized investigating and prosecuting international terrorism. But domestic terrorism, including right-wing and white nationalist violence, has not received the same attention, and hate crimes and other civil rights violations rank as the FBI’s fifth priority.

The Department of Justice has at times cited lack of statutory authority for its unwillingness to act against white nationalists and violent domestic extremists. But we don’t need new laws. In fact, the truth is that our government has a long and shameful history of abusing existing authorities to target activists and communities of color engaged in peaceful protest and acts of civil disobedience. In recent years, that has included surveillance of Black Lives Matter activists and Native protestors at Standing Rock, infiltrating mosques and sting operations directed at Muslim Americans, and even investigating community groups who opposed Trump’s separation of families at the border. Even programs for Countering Violent Extremism have too often harmed law-abiding members of minority communities. And with his aggressive prosecution of his political opponents, Donald Trump has made it clear that any new such laws would be open to abuse.

There are at least 50 offenses related to domestic terrorism already on the books. There are also other statutes that can be used to prosecute white nationalist extremists, including hate crimes and organized crime laws. We have the laws. What we lack is the will to prioritize investigating and prosecuting these crimes.

Here’s how we can do that: 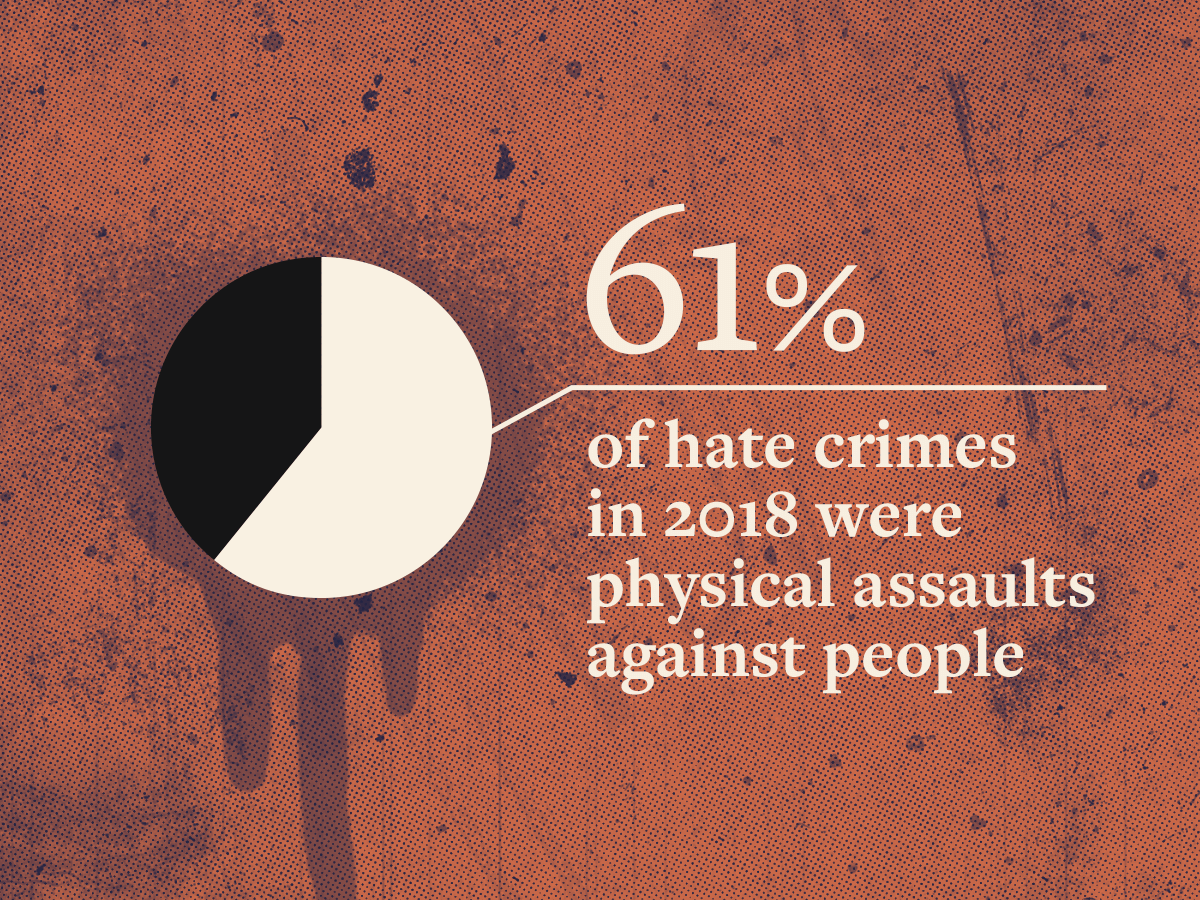 Keeping Guns Away From Those At Risk Of Violence

Too often, guns are used in acts of mass violence intended to provoke fear in minority communities. Over 10,300 hate crimes are committed each year on average using a gun. And while the majority of Americans - including a majority of gun owners - support sensible gun legislation, even the most basic proposals, like universal background checks, are consistently blocked by far-right ideologues in Congress. My gun safety plan commits to reduce overall gun deaths by 80 percent, and will keep weapons out of the hands of violent domestic extremists and others committed to violence.

17 percent of hate crimes reported to the FBI are committed by minors. In 2017 alone, there were 340 hate crimes reported at K-12 schools - more than double the figure reported in 2013. I’m committed to protecting the civil rights of all of our students, but especially those who have experienced the most hatred and fear under President Trump - including Muslim students, Dreamers, migrant students, and transgender students. But it’s not enough to have the right responses in place once a hate crime has occurred. To most effectively protect our students, we have to be proactive, addressing racism and intolerance before it has a chance to grow. Any strategy to combat white nationalist crime must invest in educating our young people and giving them the tools to recognize and prevent bias-motivated violence. That also means teachers, health professionals, and community leaders need the resources to be able to intervene before it’s too late and address the effects of violence when it does occur.

Students In Schools With Police But No... 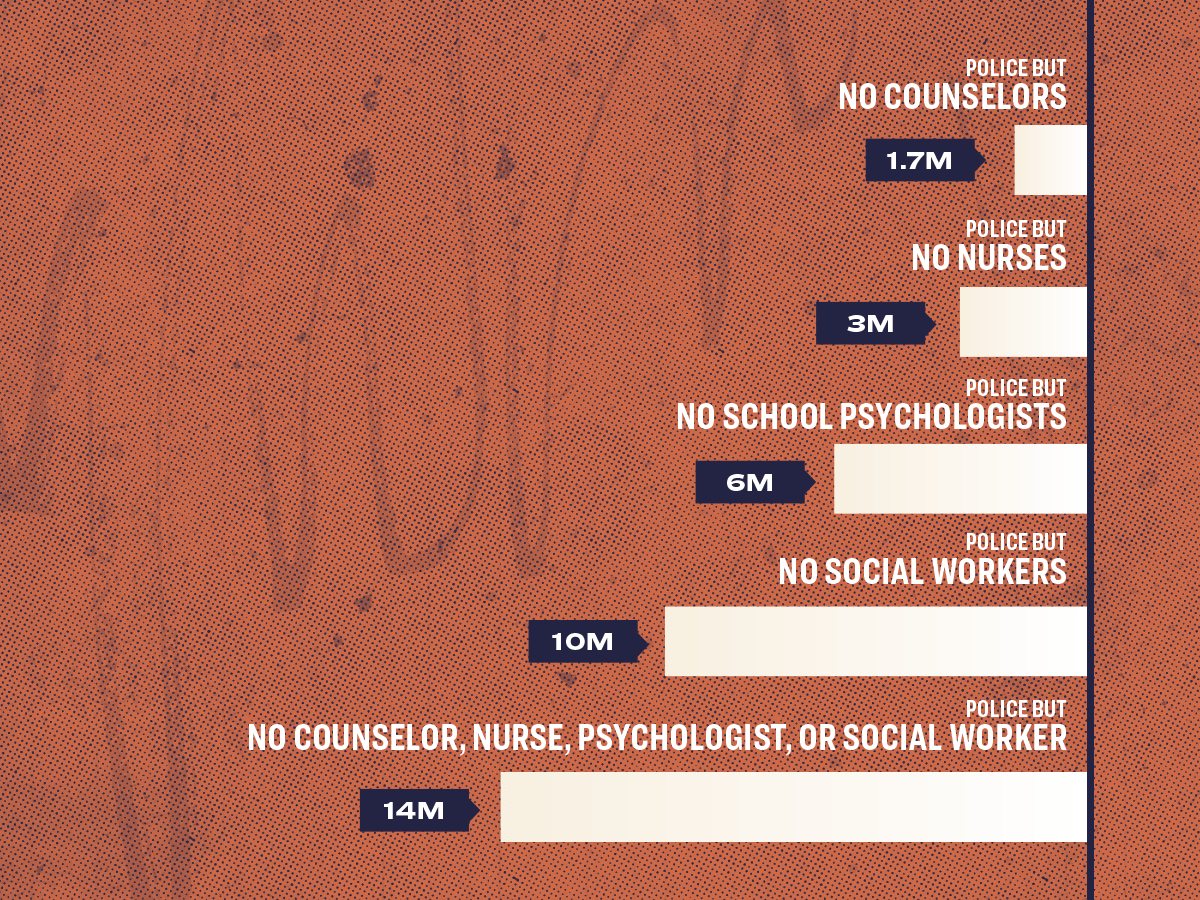 Communities targeted by white nationalists are essential partners in the effort to combat this threat, yet these same communities often lack trust in law enforcement. Undocumented people may fear reporting will expose them to immigration officials and, potentially, deportation. LGBTQ+ victims and Black and Brown communities may be reluctant to report because they fear police will side with the perpetrators or even persecute the victims.

Everyone is less safe when trust erodes between the police and the communities they serve. Survivors of violence and those who witnessed it need to feel comfortable coming forward so perpetrators of hate crimes can be held accountable. And working together will improve safety not only for the community, but also for law enforcement - because while some police departments have struggled with extremists in their ranks, white nationalists and other violent domestic extremists pose a danger to police officers themselves, as well.

As president, I’ll establish a zero tolerance policy for any federal law enforcement officer who participates in, cooperates with, or assists individuals who commit white nationalist crimes. And my plan for police reform would fundamentally change how police work is done in America, replacing failed policies with effective, evidence-based practices that do not violate individual rights.

Studies have shown that victims of crimes of bias experience more trauma compared to victims of similar, non-bias crimes. And when a hate crime is committed, not only the victim, but the entire community suffers - because the crime is intended to drive fear in anyone who looks, talks, or worships like the victim. This is particularly true for the most vulnerable - our children - while also impacting the adults who love and teach them. We need to end white nationalist violence in this country. But we also need to invest in the strength and resilience of every impacted community.

Donald Trump wants to divide us - to pit worker against worker, neighbor against neighbor. He wants Americans to blame their troubles on those who are new to our country, or who don’t look the same or pray the same or love the same, even as his administration robs us dry. 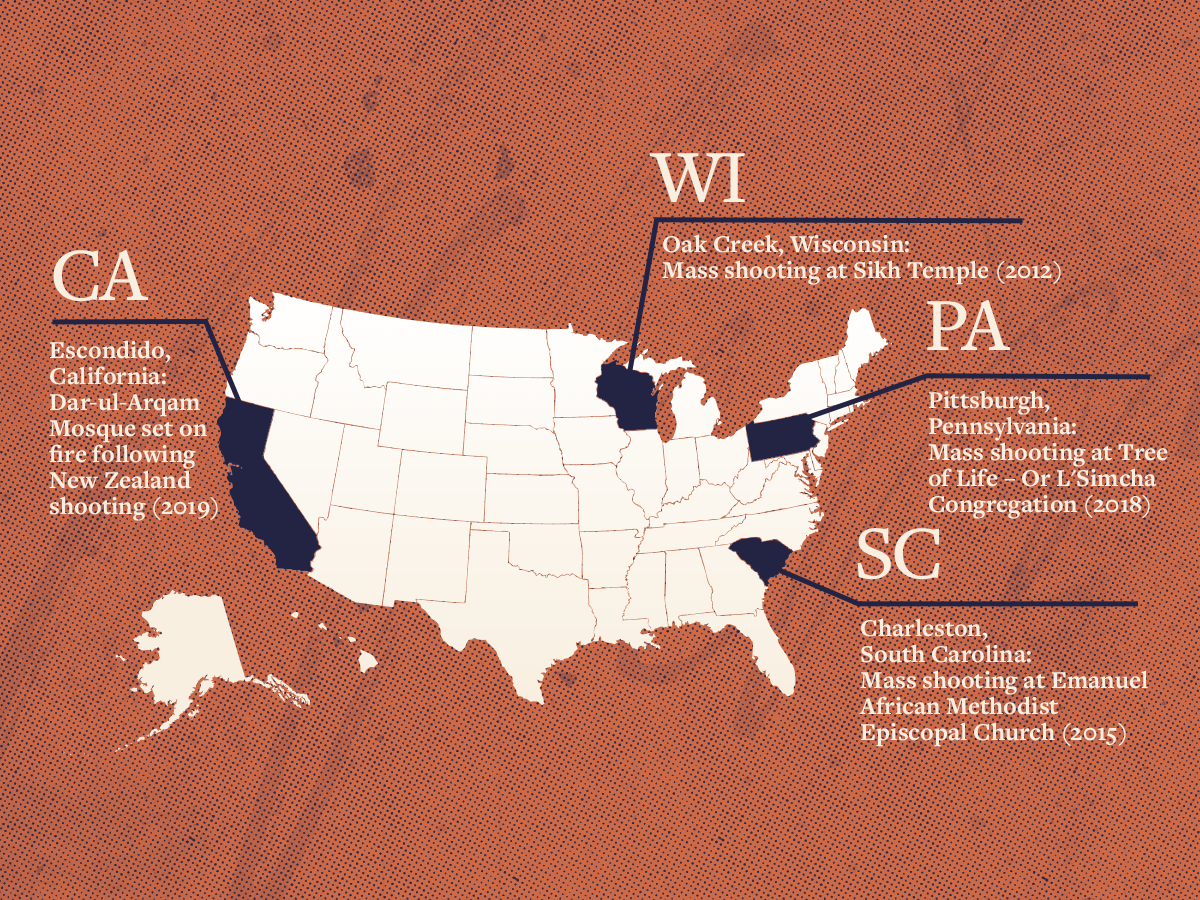 These are just some examples of white nationalist incidents against places of worship in the past few years. Source: NBC, Washington Post View in full screen.

But America can be better than that. We can be a country that prioritizes the safety of all our citizens. Because when we fail to prosecute hate crimes, we send the message that the victims are less valued. And when our neighbors are being persecuted, or attacked, or treated unfairly, that impacts all of us. To take on hate, we all have to stand up against it - together. That’s why I’m in this fight, and I hope you’ll join me.